The Color Corps is an elective division of the Fourth Degree, whose distinctive presence in parades, wreath-laying ceremonies, Confirmations and other Catholic functions is a visible reminder of our service to the community.  The ceremonial sword symbolizes Christian Knighthood, and is carried to signify reverence to Church, Eucharist, country and freedom.  The Color Corps uniform is ordered through the website KofCuniform.com.  Swords are sold separately from The English Company.
Memo on new uniform (effective 01-JUL-2019).  Memo from Uniform Supplier (The Supply Room) February 2020. 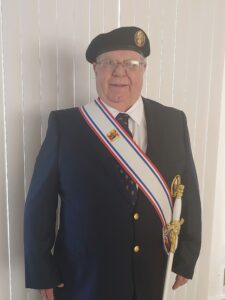 Master of the
Fourth Degree

History of the Fourth Degree

On February 22, 1900, the first Fourth Degree exemplification or degree ceremony was held in New York City. The Fourth Degree imparts a lesson on the virtue of patriotism. The primary purpose of this degree is to foster the spirit of patriotism in members and the community at large and to encourage active Catholic citizenship.

Fourth Degree Knights may become part of the assembly’s color corps.  These members are recognized widely by their distinctive uniform (slacks, blazer and beret), which on July 1, 2019 replaced the previous attire of tuxedo, feathered hat (chapeau), cape and sword. These members regularly take part in civic events and at ecclesial functions at Catholic churches.  The various colored patches on the berets denote different officer positions within the Fourth Degree.

Every citizen of every nation must engage himself daily in efforts to create a better understanding and appreciation of his country’s history and ideals. That is the meaning of citizenship; the living out of the virtue of patriotism.

Fourth Degree Knights commit themselves to this every day. They are in the vanguard of our Order in their dedication to preserving and perpetuating the freedoms we all cherish.
Our goal must be to grow the Fourth Degree by adding more members during this fraternal year; more importantly, we must awaken in more Third Degree Knights the desire to become a Sir Knight. Currently, only 17 percent of our membership has become Fourth Degree Knights.

One way we will achieve those goals is putting greater emphasis on the patriotic service programs that are unique to the Fourth Degree. We will continue to sharpen the public image of Sir Knights by participating in the color corps and honor guards at events.

A significant contribution to this effort is the new Knights of Columbus United States Flag Manual, prepared by Supreme Master Joe Schultz, which is now the definitive guide for Fourth Degree Color Corps in the U.S. This should become the source of flag protocol for all U.S. councils as well.

There are 26 million veterans in America, and hundreds of thousands of men and women currently serving in the military. Meeting the needs of such a large population has required the VA to set up more than 1,000 facilities throughout the United States, ranging from full-service hospitals to nursing homes and home-care programs.

Fourth Degree Knights have made a tremendous commitment to Veterans Affairs hospitals in recent years. Currently, there are Sir Knights volunteering in approximately 90 percent of U.S. Veterans Affairs hospitals, and last year Knights volunteered more than 104,000 hours at those hospitals. The national leadership of the Veterans Affairs Voluntary Service program has recognized the Knights for this commitment, and on behalf of the Supreme Council we thank all the Sir Knights who are “serving those who served” so admirably and faithfully. This is an ideal service program for every Fourth Degree assembly, and if you’re not already involved, I strongly suggest that you add it to your list for the coming year.

Through their leadership, sacrifice and dedication, Fourth Degree knights have earned their place atop the Order. Fourth Degree Knights are Knights of the highest degree and are held in the highest regard, in the same way they hold themselves, their fellow brothers, and the Order.

A Fourth Degree Knight is a member of a group of men dedicated to promoting patriotism, illuminated by their Catholic faith. It is an honor to wear the regalia and participate in color corps and honor guards. It is a position of prestige and something for which all Knights should strive. Ideally, every Third Degree Knight should become a Fourth degree Knight.

2. EXEMPLIFICATION OF THE FOURTH DEGREE:

Obtain and submit a Form 4 application today!  Follow these instructions.  Form and payment are sent to the Assembly which is hosting the degree exemplification (see the meal reservation form for the proper person and address).

Information about the Color Corps of the Patriotic Degree is available here.
Drill Manuals (Item 808):

The Laws and Rules Governing the Fourth Degree of the Knights of Columbus (WITH AMENDMENTS TO AND INCLUDING THE YEAR 2017) is available here.